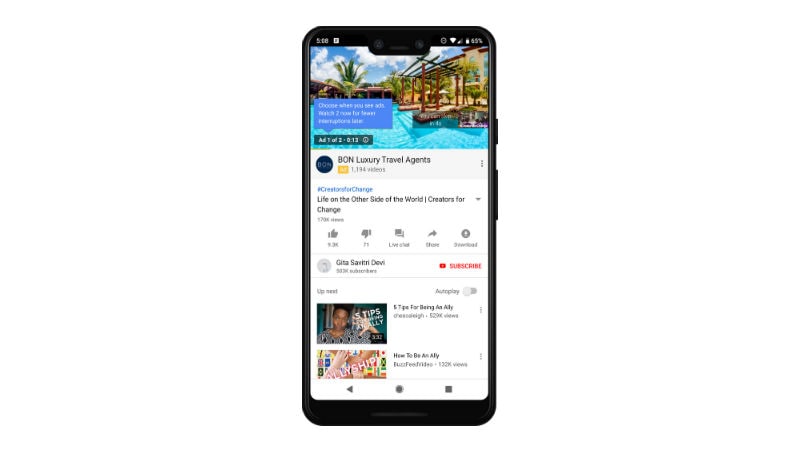 Google is testing a new way to display YouTube ads. Until now, YouTube has been presenting advertisements in the middle of videos, an experience that could be distracting for most users, especially in longer videos. However, Google has now started testing ad pods, a new feature where YouTube will play two back-to-back skippable ads during videos. This, the company says, will lead “up to 40 percent fewer interruptions by ads in the session”. The feature will be rolled out to desktop this year followed by mobile and TV.

In a blog post, Google says that the way viewers watch video is changing. Based on a user experience research, Google says that besides factors such as the length of ads, viewers are “quite sensitive to the frequency of ad breaks, especially during longer viewing sessions.” It also claimed that fewer interruptions is correlated with better user metrics, “including less abandonment of content and higher rates of ad viewing”. As a result, Google will now start testing ad pods, which means, YouTube will now show two back to back ads. Also, users will have the option to skip the ads in case they are not interested in them.

The reason behind the move, Google explains, is that YouTube viewers will be less likely to be interrupted by multiple ad breaks if they have two back to back ads at once. “Through this research, we also learned that fewer interruptions is correlated with better user metrics, including less abandonment of content and higher rates of ad viewing,” says Khushbu Rathi, Product Manager, Video Ads.

In the blog post, the company claimed that users will experience up to 40 percent fewer interruptions by ads in a session. Based on early experiments, Google says that there was an “8-11 percent increase in unique reach and a 5-10 percent increase in frequency for advertisers, as well as, no impact to Brand Lift metrics.”

As mentioned, that new way to present ads will first come to YouTube for desktop, followed by mobile and TV screens soon. As per the screenshot shared by Google in the blog post, users will be presented with a notification explaining that they can choose to watch two ads at that moment for fewer interruptions later.