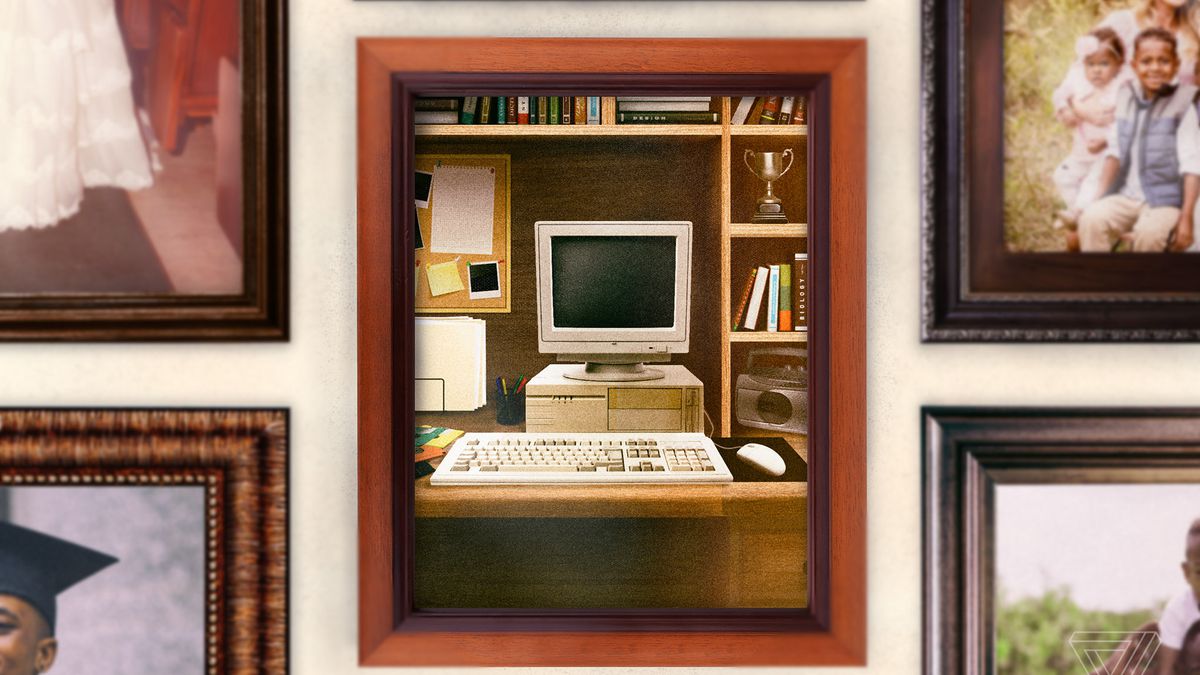 Long before phone addiction panic gripped the masses and before screen time became a facet of our wellness and digital detoxes, there was one good and wise piece of technology that served our families. Maybe it was in the family room or in the kitchen. It could have been a Mac or PC. Chances are it had a totally mesmerizing screensaver. It was the shared family desktop.

I can still see the Dell I grew up using as clear as day, like I just connected to NetZero yesterday. It sat in my eldest sister’s room, which was just off the kitchen. Depending on when you peeked into the room, you might have found my dad playing Solitaire, my sister downloading songs from Napster, or me playing Wheel of Fortune or writing my name in Microsoft Paint. The rules for using the family desktop were pretty simple: homework trumped games; Dad trumped all. Like the other shared equipment in our house, its usefulness was focused and direct: it was a tool that the whole family used, and it was our portal to the wild, weird, wonderful internet. As such, we adored it.

Now, I’m almost 30, and during my childhood in the ‘90s and early 2000s, the family computer was accepted as a beloved fixture, a pleasant epicenter of activity. But, like any technological advancement worth its salt, the PC was initially met with fear and panic. Before it settled so comfortably into the family portrait, the personal computer first had to woo consumers for an invite into their homes. This was no easy task. In the 1980s, the term “computerphobia” cropped up in magazines, newspapers, advertisements, and computer manuals. The condition was accompanied by “a range of resistances, fears, anxieties, and hostilities,” a 2015 Atlantic article notes. Computerphobia encompassed a great number of worries, including the terrifying prospect of being left behind. “We live in the age of computers,” read a 1982 advertisement for the Commodore VIC-20 computer. “Coming to terms with them is part of coming to terms with the 20th century.”

At the time, bringing a single computer into the home was a harbinger of progress that many didn’t feel ready for. Thirty years later, the idea of having only one shared device with internet access might as well be primordial. How did that work, exactly? Well, it wasn’t completely without its challenges. Mapping out uninterrupted computer time was maddeningly tricky, and privacy was basically nonexistent. You risked parental fury if a virus shut the computer down because of a visit to a risky site. Space on the hard drive was at a premium, and the computer chair was inevitably among the most uncomfortable seats in the house. Having such a valuable resource with finite availability and keeping it in a communal space required cooperation and compromise from everyone involved.

The dominion of the shared family desktop began to crumble sometime in the late 1990s, first with the rise of the affordable laptop that could be used in the comfort of your own bedroom, then in 2007, with the launch of the iPhone and the subsequent rollout of tablets. According to market research firm Gartner, Global PC sales peaked in 2011 and have been on a downward trend since (except for a small 1–2 percent growth this year). While most homes still have a PC, a survey conducted by the Centers for Disease Control and Prevention in 2016 shows an at-home technology landscape that would’ve been unimaginable when I was a kid: the typical American household now contains five connected devices, and nearly 1 in 5 American households are what the study calls “hyper-connected,” meaning they contain 10 or more connected devices.

Families today have more than enough devices to go around, which, in some ways, is a good thing. Schoolwork can get done more efficiently, children are freer to explore their own individual interests, and parents have far fewer fights to break up. But, it’s also complicated. While about half of us say we couldn’t live without our phones, a quick Google search will tell you that teens and parents are at war, and we need to make a family tech plan ASAP otherwise our kids will start school not knowing how to speak in full sentences. We’re unsure of how to best manage technology in our homes, and we’re panicking. It’s here in this growing tension of reliance and worry that the forgotten philosophy of the shared family desktop has its merits.

Many of the digital anxieties we have today could, at least in theory, be addressed by returning to a single, shared family device. The shared family desktop was vital to our lives, yet at the same time, it remained quiet and unobtrusive, serving the family unit proudly whenever called upon. You could still get lost for hours playing Space Cadet Pinball or waiting for your crush to log on to AIM, but it’s hard to imagine developing an unhealthy addiction or needing digital wellness tools to help manage your screen time with one shared computer. While the personal nature of devices today makes it easier to isolate and keep our online habits private, the shared family desktop offered a transparent and communal, albeit old-fashioned, approach to keeping parents more actively engaged in their child’s screen time by being around while their child used the internet.

Whatever small inconveniences we shouldered during the shared desktop era have been rendered meaningless in today’s tech-saturated households. But maybe it was those annoyances that maintained healthy boundaries and, in a way, made the family computer so special. The advent of constant access has inevitably changed our relationship with tech. At one time, discovering the magical capabilities of our devices astonished and invigorated us. Now, we find them glomming on to our routines: joining us for dinner or family strolls, going on vacations or out on dates with us, waking us up in the morning and tucking us in at night. Though it was harder to come by, the computer time you ended up with on the shared family desktop was cherished and, maybe as a result, that much sweeter. Yet there was an untroubled ritual that, day after day, required us to step away.

My inability to step away from my digital devices recently motivated me to get rid of my smartphone. As a new parent, I’ve been taking a much broader personal tech inventory, too. Now that I have a daughter who watches and learns from everything that I do, I keep asking myself: do I like what she sees? Do I like what I see? Am I prepared to model good tech habits for her? Honestly, the answer is no on all three counts. When I was a kid, many parents were still fairly clueless about the internet, and it thusly terrified them. As a millennial parent, I pretty much know what’s out there. The pervasiveness of access is the new monster. I don’t know if a shared desktop is the answer, but as I continue to figure out what tech should look like in our home, I do know that physical boundaries seem pretty important.

My parents never got rid of our desktop. It sits in disrepair at their house under stacks of papers and a dusty framed photo of my nephew. I’m not sure why they still have it; they both have smartphones, laptops, and tablets. But sometimes when I see it sitting there, I think of my mom typing up lesson plans or emailing my sister while she was away at college in Austin. I imagine years of research papers and book reports, printed on crisp, white computer paper, and rainy afternoons spent chasing Carmen Sandiego around the globe, the dog snoring at my feet. I think of a family growing older, moving on, and I am glad it’s still there. It’s a reminder that I don’t need to be entertained 24/7, more isn’t always better, and, with the right balance, screen time can still be a good thing.