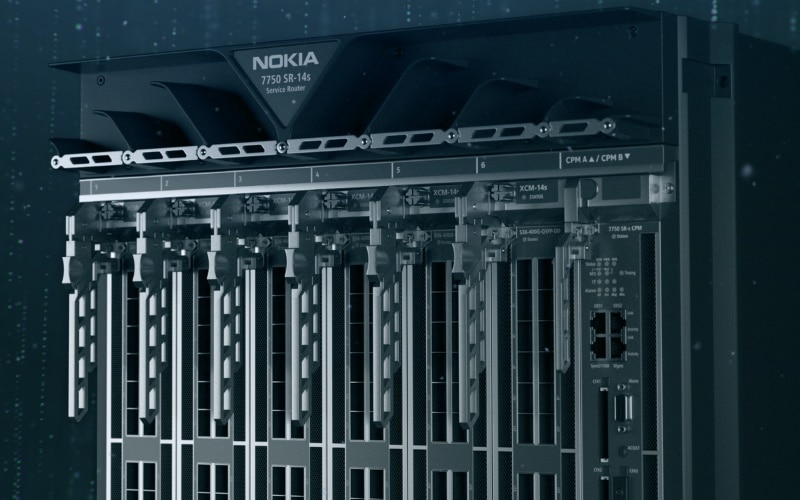 Nokia’s new products, which grew out of its 15.6 billion-euro ($17.5 billion) 2016 acquisition of Alcatel and its IP network gear business, should help it win business from companies such as Facebook, Google, Apple and Amazon.

For these “web-scale” customers speed is everything and unlike Nokia’s traditional telecoms customers they are still increasing spending on network gear.

The routers are compatible with older products and will also serve Nokia’s existing customers who want speed but must still contend with legacy gear needed to run existing services.

“Nokia will have the highest-performance system capacity in the market, and a lot of those web-scalers, they just want speed,” Ray Mota, principal analyst at ACG Research, told Reuters.

The former Alcatel IP networks business is already the world’s No. 2 player in edge routers behind Cisco, having displaced Juniper Networks, which is now No. 3.

The Nokia business also competes with Huawei in router markets outside the United States, where the privately-held Chinese firm is barred for national security reasons.

Nokia executives expect to take market share from all the big competitors, including Cisco and Juniper as well as Huawei.

“Whether its web-scale or vertical markets (such as banks, transportation, energy and public sector), where we have been less exposed in routers, clearly we will gain share,” Nokia Chief Executive Rajeev Suri told Reuters in an interview.

“This gives us momentum in core routing.”

Simon Leopold, a financial analyst with Raymond James, said Juniper, which depends for around a quarter of sales from web-scale customers such as Facebook could be hardest hit. “There is at least headline risk to Juniper, once Nokia ships,” he said.

Petabits
Nokia said it is introducing its latest FP4 silicon chipset capable of processing data at 2.4 terabits per second. The new chipsets are set to ship in the fourth quarter, with routers running FP4 chips ready in the first quarter of next year.

These will be built into routers to operate both ultra high-speed “core” networks at the heart of the biggest internet services and also “edge” networks that link datacenters to front-line customer services on mobile or fixed-line networks.

Telecom operators’ capital spending is rising by just 2-3 percent a year which means Nokia is turning to web-scale players whose spending on new network gear is growing by double-digits.

FP4 chips, which are manufactured for Nokia by Taiwan’s TSMC are designed using circuits as narrow as 16 nanometers apart, skipping 22- and 28-nanometer-sized circuits compared to the prior FP3 processor built at 40-nanometer scale, Nokia said.

Nokia is introducing the 7950 petabit-class router aimed at the core routing market to help it win business from customers such as Apple and Facebook. A petabit can transmit 5,000 two-hour-long high-definition videos every second.For edge network customers, Nokia is introducing its 7750 router, offering the highest traffic capacity on the market.

Mota said the Nokia 7750 can deliver speeds of up to 4.8 terabits per slot, compared with Juniper’s 3 terabit edge router speeds, which had been the industry’s fastest. A terabit can transfer a high-definition Netflix TV episode in one second.

Beyond sheer speed, there is enough processing power head-room in its new chipset to offer built-in security features to fend off distributed denial of service (DDoS) attacks.

“If you look at London, one of the busiest parts of our network, we need this platform today,” McRae said.