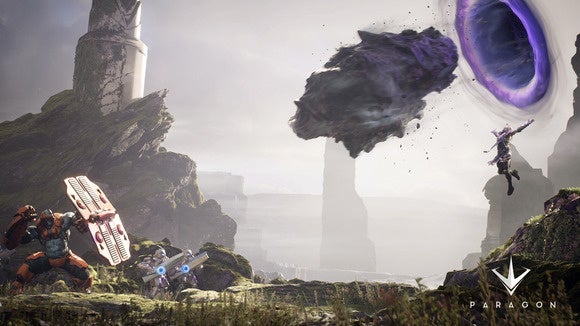 There (obviously) wasn’t much PC-centric news out of this past weekend’s PlayStation Experience convention in San Francisco, but Saturday’s keynote did hold one big announcement: Epic is making a revolutionary game in a genre nobody’s ever seen before.

Oh…oh wait, I mixed that up. They’re making a MOBA. It’s Paragon, which you might remember from its series of camera-spins-around-a-3D-model teasers this past month. Here’s the (decidedly more substantial and also extremely pretty) announcement trailer:

Graphics aside, Paragon’s apparently a third-person shooter/MOBA hybrid, though in my interview over the weekend Epic mostly stressed the MOBA aspect. Expect the usual five-versus-five hero combat on a three-lane map, populated with AI-controlled fodder. Also, verticality—the three lanes are apparently tiered, allowing for cross-lane sight lines, skill shots, and strategies. Or as the Paragon site puts it:

“Dive into the depths of the jungle to flank your enemy, or scale the heights to strike from above. Real elevation on an open map means you’ll have to rethink the way you approach the fight.”

I’m definitely more interested in this action-oriented strain of MOBAs than I am in something like League of Legends or Dota 2, but I can’t pretend Paragon is wholly unique even in that regard—Smite and Monday Night Combat both did the third-person action-MOBA thing already, and 2K’s Battleborn is doing the same in first-person.

Still, I’m not willing to write off Paragon without playing it, given Epic’s earned a reputation for quality shooters—and Smite could use the competition. Paragon is scheduled to hit paid early access in spring of 2016 through Epic’s launcher, with a free open beta to follow in the summer. You can sign up here. As for whether it’s coming to Steam, Epic gave me a noncommittal “I don’t think we’re ready to talk about that right now.”