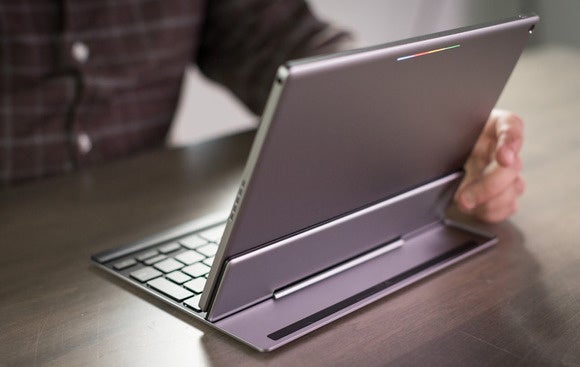 It also runs a pure, unencumbered build of Android Marshmallow. That makes it bloatware-free, and the recipient of Google’s most timely OS and security updates. But Google is positioning the Pixel C as a halo device for Android’s productivity features—and in this mission, this productivity mission, the tablet falls short.

The Pixel C’s most interesting hardware feature is a $149 keyboard accessory that magnetically attaches to the bottom of the tablet. Google’s unspoken productivity message is loud and clear: Look at how much you can do in Google Docs now that your tablet has a proper keyboard. But while it’s a really good keyboard, it’s married to an overall tablet experience that hasn’t been deliberately optimized for work scenarios.
Killer industrial design? Check. Useful keyboard accessory? Check.

It’s a shame, because the Pixel C ($499 for 32GB and $599 for 64GB) is nearly state-of-the-art hardware. The only feature it really lacks is the same awesome fingerprint sensor that’s found on the Nexus 6P and 5X. This is a disappointing omission, but if you’re looking for a pure Android tablet, know that the Pixel C is a more generously appointed device than the Nexus 9, whose 32GB version costs only $20 less than an equivalent Pixel in the Google store.

However, if you need a no-compromise productivity tablet, and don’t care about the OS you’re running, then you’ll probably do better with hardware from Microsoft, Apple, and even Samsung. Their tablets are all better suited for multitasking and other productivity scenarios.

If you want to know how the Pixel C performs as a workhorse, jump to the section titled “Love the keyboard—but is that it?” For now, let’s get into the tablet’s industrial design.

When paired with the keyboard, the Pixel C looks like a miniaturized version of theChromebook Pixel, borrowing the same winning design cues from that Chrome OS laptop. The tablet’s aluminum cladding has a premium, satiny feel, and the body’s gentle lines and curved corners feel great in the hands.

And, yes, that’s hands, plural. At 9.5 inches wide and 1.14 pounds, the Pixel C feels chunky compared to the slightly smaller and lighter Nexus 9, and unless you have really big hands, you won’t be able to thumb type on Google’s stock soft keyboard. That said, the Pixel C didn’t flex when I did my best to torque, twist and otherwise torture the chassis. I can’t say the same for the Nexus 9, which creaks and bends under pressure.

Like Google’s Chromebook, the Pixel C has a lightbar at the top of its aluminum backside. Besides serving as a persistent, physical expression of Google’s colorful branding scheme, the lightbar signals to other road warriors that you’re a very special person with a very special tablet—and that’s about it. Double-tap the surrounding aluminum, and the lightbar briefly turns into a battery-level indicator. Beyond that? Nothing.

And, personally, I like the Pixel C’s oddball 1:√2 aspect ratio. It may have forced Google into trimming down some of its hardware keyboard keys (more about that soon), but it provides extra width when viewing websites in portrait mode, and much-appreciated extra depth when working with text documents in landscape mode.

Pixel-for-pixel, the C’s display is both brighter and more saturated than the Nexus 9 display. It’s also a larger display, making the Pixel C the obvious choice if you want pure Android in the biggest screen size possible.

A big screen demands big silicon behind it, and the Pixel C packs enough silicon to take on an army. The headline chip is an Nvidia Tegra X1, which integrates a GPU based on the Maxwell architecture that has been so successful in Nvidia’s latest PC graphics cards. There’s also 3GB of LPDDR4 RAM. Currently, the only other notable device running the Tegra X1 is Nvidia’s own Shield Android TV box. We have scant experience with this chip, but can now share it’s a total screamer.

During real-world use, the Pixel C never lagged or hiccupped on any screen transitions, browser scrolls, or video playbacks. The user interface is fluid and slippery, and I’ve never seen a mobile device of any kind download and install apps so quickly. Likewise, benchmarks demonstrate the Pixel C’s sheer ownage of other Android devices.

In PCMark’s Work Performance test, Samsung’s Galaxy Tab S2 9.7, a natural competitor, achieves a spectacular 5840. But the Pixel C trounces that score with a 6711. And take a look at the 3DMark gaming test results in the chart below. The Pixel C obliterates the competition. Test after test after test, the Pixel C made other Android devices look like dated technology.

Google says the Pixel C delivers over 10 hours of real-world battery life, and anecdotal use suggests the tablet’s high-performing silicon and demanding display don’t suck an inordinate amount of juice. But, unfortunately, we weren’t able to verify the lifespan of Google’s 34.2 watt-hour battery with PCMark—the benchmark repeatedly failed to complete its rundown test. We’ll update this review once we get a test result.

The Pixel C charges relatively quickly via its USB Type-C port. I don’t mind that Google is going with the newfangled charging spec, especially because I have a growing collection of 15W charging adapters, thanks to my Nexus 6P daily-driver smartphone.

Besides that lone USB port, the Pixel C also features four mics for far-field voice input. It’s a great idea, but I found the Nexus 6P to be far more responsive to “OK Google” voice commands from more than a few feet away.

Besides an 8MP rear camera and 2MP front camera—neither of which we care too much about because, er, this is a tablet—the only other outward-facing components worth mentioning are two stereo speakers on either side of the Pixel C’s aluminum chassis. Their output is tinny, but notably high volume. The excellent front-facing Boomsound speakers on the Nexus 9 have much warmer sound, but don’t crank nearly as loud.

Love the keyboard. But is that all she wrote?

The Pixel C Keyboard might cost $149, but it’s a more substantial piece of kit than the $130 Type Cover for Microsoft Surface devices. It’s also a far better input device than the $169 Smart Keyboard for iPad Pro. The Pixel C keyboard offers a generous 1.4 mm of key travel, and just feels exceedingly well-prepared for use and abuse.

When cradled in the keyboard, the Pixel C’s screen tilts from 100 degrees (basically fully upright) to 180 degrees (though it stops being useful after about 135 degrees). We love the continuous range of motion, and once you choose a tilt angle, the screen stays put.

If we have any criticisms at all, it’s the keyboard’s lack of backlighting and truncated key layout. The letter and number keys are perfectly fine, but this isn’t a full-size keyboard. Some keys (like the rando bracket and pipe keys) are missing, and some are smaller than standard. The right-side backspace, enter, and shift keys—each comically small—caused a few misfires during typing.

Regardless, the keyboard is a great productivity tool. And some day, when Google updates Android with a few key features, the Pixel C will be kickass productivity tablet as well.

Most glaringly, Android still doesn’t include any type of multi-window mode that let’s you use two apps side-by-side at the same time. This feature is buried deep in Marshmallow’s source code, but Google still hasn’t activated it for general consumer use. It’s a shame that home screen-level multitasking wasn’t released alongside the Pixel C, because multi-window is a headline feature in Microsoft, Apple, and even Samsung productivity tablets.

And this ties into my overarching Pixel C complaint: The tablet hardware itself is awesome, but aside from the keyboard, the Pixel C doesn’t really feel like a “productivity tablet” as we’ve come to know them in 2015. There’s no multi-window support. There’s no pen support. Google Docs remains exactly the same as it did yesterday, even though it’s crying out for customized synergy with the Pixel C experience.

In short: There are no new surprise-and-delight productivity features that say, “We’re Google, and we’ve just made Android even more useful for getting things done.”

Sure, Google Now On Tap is built directly into Marshmallow, and it’s a great tool for running contextual information searches in a wide variety of apps. I love it—but it’s not a game changer. Even worse, throughout testing I was continually annoyed by Chrome constantly defaulting to dumbed-down mobile views of my favorite websites. Even the Nexus 9, with its smaller screen, shows full desktop views of the exact same sites. The Pixel C is supposed to be a productivity tablet, yet it makes surfing the web a more tiresome, un-productive affair.

In sum total, the Pixel C cries out for a new Android software experience to complete its productivity story with a dazzling payoff. Indeed, if it launched with multi-window support, it would have earned a 4.5 verdict, or perhaps even a perfect score. This despite the fact that some of us at Greenbot and PCWorld feel it’s just a bit too heavy compared toSamsung’s 9.7-inch Galaxy Tab S2—which does do multi-window.

Am I being too harsh? I don’t think so. This is a Pixel, damn it. Google has complete control over the manufacturing and user experience, and as the company states in its reviewer’s guide, “We create Pixel products when we see an opportunity to rethink an experience inhouse and design a new type of technology that will support and inspire the partner ecosystem.” It’s a lofty goal, but in this case, it seems the Android and Docs teams weren’t invited to the rethinking party.

But make no mistake: The hardware itself is superb. If you want a pure Android tablet, this is the one you buy. And because it’s pure Android, it will be one of the first tablets to run Google’s version of multi-window when that feature finally exits development and is pushed live to the world.