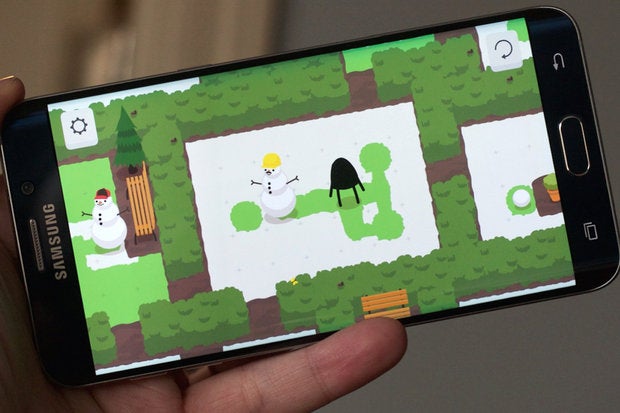 If your idea of “big plans” this weekend is vegging out on the couch while making the most of your streaming video subscriptions… well, first: we like your style. And second, be sure to grab Yahoo Video Guide on Android, which helps you find what’s new and interesting on only the services you have access to.

It leads our latest look at new Android apps and games, and is joined by the public release of Microsoft’s Cortana voice assistant, as well as SwiftKey Symbols, an admirable release designed to help non-verbal individuals. If it’s games you’re after, A Good Snowman is Hard to Build is a charming, seasonally appropriate puzzle adventure, while Magic: The Gathering Puzzle Quest blends match-three gameplay with the collectible card classic. Load up on some new apps to help you enjoy the weekend, whatever your plans are.
Yahoo’s streaming-centric app helps you find the media to match both your subscriptions and mood.
As Netflix, Hulu, and Amazon release more and more compelling original content, it’s getting harder to resist juggling multiple streaming subscriptions. Add a cable plan to that, and you may well be paralyzed by all that choice. Yahoo is here to help. The new Video Guide app is designed to filter through the services you have and help you find the latest and greatest movies and TV shows across platforms.
Simply check the boxes for which services and apps you have access to, and Yahoo Video Guide will recommend new content and tell you where to get it and for how much (for standalone rentals or purchases). There’s also a mood selector, which lets you pick the kinds of content you’re up for and tailors its recommendations in kind.

A Good Snowman is Hard to Build

Anyone can clump some fresh, wet powder together to make a lumpy, misshapen snowman, but a good one? Well, as this adorable indie game’s title suggests, that’s not so easy. A Good Snowman is Hard to Build ($5) creates a methodical puzzle game out of the process of building a proper three-level snow friend, with each new puzzle tweaking the challenge to some extent.

See, the balls start small, and you’ll need to maneuver them into position to stack atop each other. However, rolling a ball across the snowy grass causes it to grow larger, so you must to plan out your moves to avoid ending up with too many large snowballs, or ones that you can’t get into position without boosting their size. It’s clever, not to mention delightfully drawn and animated.

Microsoft’s Cortana voice assistant first appeared in betaback in August, but as of this week, it’s available in a full public release. So what’s the deal with this Google Now alternative? It does many of the same things, letting you speak out queries for searches, find data relevant to your daily needs and patterns, and see cards with news, weather, and other info, although it doesn’t have the seamless OS and app integration of Now.

For example, it doesn’t have anything like Now on Tap, and the Cortana ran sluggishly on the Galaxy S6 Edge+ I tried it on. So what’s the benefit? Windows 10 integration: you can add location and time-based reminders from the desktop and have them appear on your phone, plus Cortana can integrate with your email to pull more data for alerts and contextual cards. Most users will probably still get more out of Google Now, but Windows die-hards could be swayed by Cortana.

Indeed, the card-battling mechanics come into play on the board, where you’ll link together icons to generate mana to summon creatures and support cards. Deck building and management are likewise a part of the experience, finding a nice middle ground between the two established properties here. If you like either game’s earlier incarnations, or just want a puzzler you can really sink your teeth into, give this freebie a shot.

SwiftKey’s Greenhouse initiative has launched a few interesting apps already, including tweaks on its flagship keyboard and a hexagon-centric launcher, but Symbols is quite different. It’s an image-based communicator designed primarily to help non-verbal individuals convey emotions, and let people with special needs or learning disabilities have a voice.

You’ll choose from simple symbols to create a message—like “I want wash hands”—and then press the play button to have it spoken out. And thanks to SwiftKey’s predictive tech, it’ll learn from your routines, and prompt frequently-used symbols at the times and days you’ve used them in the past. It could be an incredibly helpful tool, so good on SwiftKey for developing it and releasing it free.