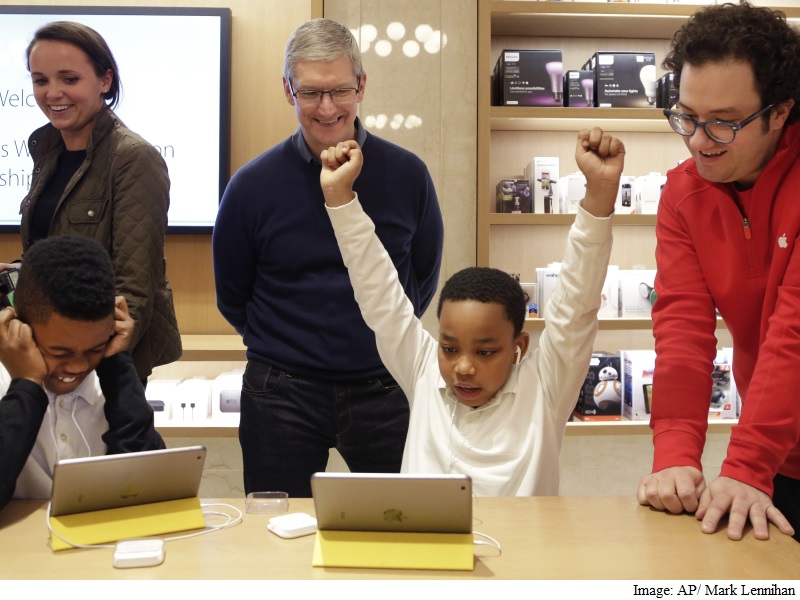 Teaching kids to code is just as important as teaching them any other language. And the younger they start learning it, the better, Apple CEO Tim Cook said Wednesday.

Cook spoke to a group of New York third graders who visited a Manhattan Apple store for an “Hour of Code” class. In an interview afterward, he said that schools aren’t putting enough emphasis on computer-science education, but he has “great hope” that will change and coding will ultimately become a required class for all kids.

“From an economic standpoint the job segment itself today is huge, but it’s going to become even larger,” Cook said.

And if the concepts are introduced at a young age, in a fun way, it’s more likely that kids will find them cool and stay interested as they grow older, hopefully resulting in a larger and more diverse tech workforce down the road, he said.

Cook added that even if kids don’t grow up to get a lucrative job in the tech industry, they’ll discover a new way to be creative and pick up important problem-solving skills along the way.

The kids at Wednesday’s event played with a Star Wars-themed game created by the non-profit group Code.org in partnership with Disney. On iPad Minis, they used basic drag-and-drop commands to program their droid to do things like pick up scrap metal and evade Stormtroopers.

Their teacher, Joann Khan, said Wednesday’s introduction to coding was probably a first for most of her students, noting that her school, located in Manhattan’s East Harlem neighborhood, no longer has a computer lab.

She said the lessons taught through the game bring to life some of the math skills the kids are learning in her classroom, something she planned to point out to them when they returned to school.

The “Hour of Code” workshop was one of many held by Apple Inc. and a slew of other technology companies around the world this week as part of a Code.org push to introduce as many kids as possible to computer science through a one-hour class.